The best 2 words I've heard in a while. Liam's mass hasn't changed size or characteristics.  It's what we've been hoping for.

In 10 hours we are scheduled to have the follow up test that may be life altering.  Hopefully, it's nothing. Hopefully, it's the least exciting denouement possible. NO CHANGE! (or better- NOTHING IS THERE!) That's what I have prayed for every.single.night. for the past 3 months.

To say that I am anxious would be down playing it.  I've never been more nervous about something in the entirety of my life but I am looking forward to getting this over with almost as much as I want to just ignore everything and cancel the appointment.  It's a difficult conglomeration of feelings.

6:00 AM will come too soon tomorrow morning. Tomorrow will incorporate the longest few hours of my life.

It's been a while since I "blogged".

We've been living life.  We've been basically ignoring the elephant in the room and I think that's what we need to do.  If we spent every day dwelling on the "what if's" we'd never have a happy moment.

Liam has been great.  Super, wonderful, awesome, and any other adjective you can think of that means good.  His eye have been perfect since the surgery.  He has been hitting all his milestones, he's walking, he's laughing, he's loving life, and as far as I can tell, the mass has not affected him in the least bit.

So why am I back?  Well, this is an outlet for me.  And the count down is starting.  We're only a few days away from the MRI.  I've got so much anxiety and worry.  I look at my perfect son and can't believe that there is anything that makes him not perfect.  I don't know what I will do if the MRI shows anything other than no growth.

I don't want to come off as woe is me- that's the last thing I want.  I don't want pity from people. Liam doesn't need pity.

All he needs is a miracle.

And on Thursday we will see if we get one.
Posted by J at 6:20 PM No comments:

Ok- So we had a follow up for Liam's eye surgery.  Everything went well.  The doctor said it appears as though Liam is using both eyes equally and the eyes line up perfectly so no need for a surgical revision.  YAY!  We will follow up again in 3 months, then, if all is clear at that time, we will be discharged from the eye doctor's care.   We will just need routine eye exams to see if Liam will need glasses or whatnot.
Now, years down the road, the strabismus may resurface and we will need another surgery, but that may be never.  So here's to hoping.

Liam's MRI is on August 29th.  19 days away.  I'm actually starting to get a little nervous already.  I still pray every single night- I sing the prayers when I rock Liam before bed.  Two birds with one stone.

Liam turned one on the 26th~ we had a nice party and he did awesome.  He didn't cry.  He was happy and actually engaged with a lot of people.  He even helped open his presents!  I will post pictures of the party on here soon.  But here's his one year pictures.  He's getting so big! 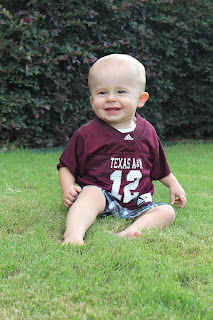 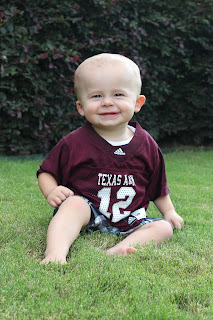 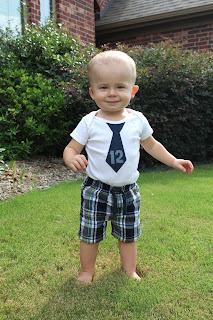 Liam had his surgery Thursday.  Yes- It's Sunday and I'm just now getting around to writing this.  He is doing fine.  He rebounded just like the doctor said he would.  He was drugged the day of but did just fine a few hours later.  We finished surgery mid-afternoon and took Liam home.  By that evening he was up and "walking" (using his push walker) around and laughing.  He slept GREAT that night.

By "GREAT" I mean he slept 13 hours straight. I'm guessing the pain meds were still in his system.

The next day he acted fine but slept horribly.  He wouldn't nap and he was up a few times (aka every 3 hours).  The next night was even worse.  I don't know why exactly but the "deep" sleep anesthesia places Liam under screws him up with his nighttime rest for a while.

I think he has nightmares because basically me just picking him up calms him down enough to get him back to sleep after he wakes up SCREAMING.

His eyes are blood shot.  He has bilateral subconjunctival hemorrhages.  We've had only one person, a waiter, actually brave enough to ask "What's wrong with his eyes" but for the most part people just comment how cute he is.  I want to tell them "He just had surgery" but since no one says anything, I don't either.  I know they notice and they're just being nice.

The doctor warned me that he may be "wall eyed" but really he seems pretty good.  I never realized how bad his "lazy eye" was until we "fixed" it.  All and all, he's doing great.  You'd never know he just had surgery a few days ago.  I don't regret a thing.  He seems oblivious that anything recently happened.

To quickly recap what's going on with Liam.  Lazy eye+ big head  = MRI.  MRI shows mass unrelated to big head and lazy eye.  Lazy eye?  Fixed!  Mass.... to be determined August 29th.  Please continue to keep us in your prayers!  I know it's a lot to ask and I know it's not quite the denoeument that people hope for since we really have no "update" and I hate to keep asking, but please.... keep us in your thoughts and prayers!
Posted by J at 8:57 PM 2 comments:

Well, the day is finally upon us.  After being scheduled, and rescheduled, and scheduled again, tomorrow is (one of)the big day.  I had no idea what time we had to be there until the surgery center finally called me at 11:30 today.  What did they say?

It's nearly 9:00 and I still haven't decided if I'm setting an alarm to get up at 5:00 and feed him some huge meal.  - He probably won't even want to eat at that time.

And, I really don't know why I've fixated on this whole "not eating thing" either.  I'm sure that's the last thing most parents would care about.  There is the SURGERY part of tomorrow.

Perhaps I'm in denial and don't really want to think about that?  Maybe I really am ok with it since I'm in the medical field?  I don't know.  And I really thought I was fine and had no concerns until I had my first little panic attack this morning on the way to work.  That was fun.  I was driving along singing to music when, BAM, my heart was racing, I was crying, and I was....... scared.  That lasted about 2 minutes then I was better but maybe I'm not handling this as well as I thought I was?

Maybe I'm just going crazy.  Maybe I should stop rambling.  Ok.  I'm off to decide if I should wake a sleeping baby to force feed it.... decisions decisions 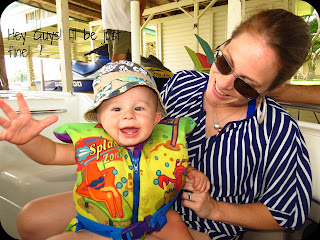 The point of this post is not to make anyone feel bad.  It's not to make people feel sorry for me either.  It's just to kinda get it out.  It's a bit rambling and for that I apologize.  It may be a little whiny too.  Sorry.

I put him to sleep every night and wonder if he will be ok in the morning.  I wonder if I get pregnant again if people will judge me because they think I'm trying to replace my "sick" kid. 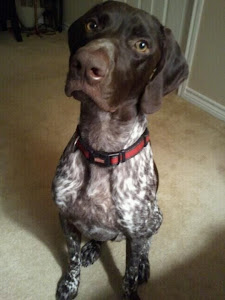 no longer the only child.

J
I am a first time mom and loving it. I love my family and friends. I like to drink wine and eat good food but I'm just learning how to MAKE the good food I eat~!